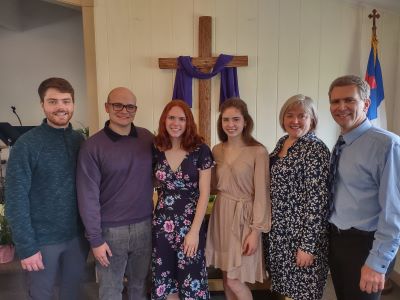 For some inspirational devotional reading and guidance in better understanding the Bible and living the Christian faith, see the resources below written by our pastor.

Incarnational Devotional (on the mystery of Christ/the God-Man)
Principles of Discipleship (a study on "Mark")
Taking the Prophetic Word to Heart (a study on "Revelation")
Christian Theology (sermon notes on our Statement of Faith)
Intro to Salvation History (highlights of the storyline of the Bible)
Marcus Johnson came to pastor our church in November of 2002. He and his wife, Gwen, were married in 1992 and have three children (and a son-in-law to be). Since that time they have served the Lord together in three local churches, an inner-city street ministry, a food & clothing pantry and some youth organizations.

​Since the late 1980's, Marcus has ministered pastorally and evangelistically to millennials, special needs persons, senior citizens, the LGBTQ community, some in the Muslim community, while serving in cross-cultural contexts, in rural, suburb and urban neighborhoods. Back in 1987, Marcus started teaching and preaching through the ministry of an interdenominational youth group, in his hometown of Prophetstown, IL. It was during that time that he sensed God's call into ministry. He later attended Wheaton College where Gwen and he met. Gwen earned a bachelor's degree in Sociology (1992) and Marcus earned a bachelor's degree in Christian Education (1992), and later a master's degree in evangelism at Wheaton Graduate School (1996). During their time here with us, Marcus has furthered his theological training by taking additional Bible and theology classes through Trinity Evangelical Divinity School.

From 1990 to 1996, Marcus served with Emmaus in Chicago, a Christian outreach to young adult men involved in prostitution on the streets. He was an outreach volunteer for two years, and their outreach coordinator for four years. Following that, he pastored Living Hope Church in Plano, IL from 1996 to 2002, where he was ordained as a minister in March of 1997. During that time, Marcus directed the ministry center of Living Hope Church which offered food, clothes, and spiritual help to over sixty families a week. Gwen served as a case manager in foster care while they lived in Chicago and worshiped at Uptown Baptist Church. During their years in Plano and here in Round Lake, Gwen has invested significant time in caring for and educating their three children, including working with and serving on the board of a home school organization called Apple Tree, and writing and directing plays for the high school students. She is gifted in hospitality and active in the fellowship and ministry of our church, and currently serves as a deacon and our Missions Director. Gwen has worked for several years at a local library, including as the Head of Public services since July of 2021.

In his pastoral role, Marcus serves with our elders and deacons in leading our church as we seek to be a God-glorifying, Christ-centered and Spirit-filled congregation. He gives priority to expository preaching and biblical teaching, youth ministry, outreach, fellowship, prayer and leadership development. He serves in our children's ministry and helps in areas such as administration and yard work. Marcus was also instrumental in developing the vision for our youth and young adult mission called The Bridge, and serves as the Executive Director. He is also active in the Evangelical Free Church of America (EFCA), which our church joined in 1970. In September of 2006, his ordination as a minister of the Gospel of Jesus Christ was acknowledged and transferred to the Evangelical Free Church of America. He also helps guide our church in living out the biblical model of "interdependence." We are an autonomous local church who chooses to support, cooperate with, and seek the guidance of the Evangelical Free Church of America, and its international mission called Reach Global. He also leads our church and The Bridge in working together with local ministries and community organizations, such as Informed Choices, Child Evangelism Fellowship, and the Round Lake Area Scouts.

"My wife and I are very grateful to God for His grace, and to the way He has blessed us through numerous family and friends, who have impacted our lives with love and support and who we have served with in gospel ministry over the years. This includes loved ones from our hometowns, Wheaton College, Emmaus and Uptown Baptist Church in Chicago, Living Hope Church, the EFCA, Apple Tree, the Round Lake Community, and Lake Region Bible Church."  ---Marcus Johnson